At Least 25 Palestinians Injured In Hebron 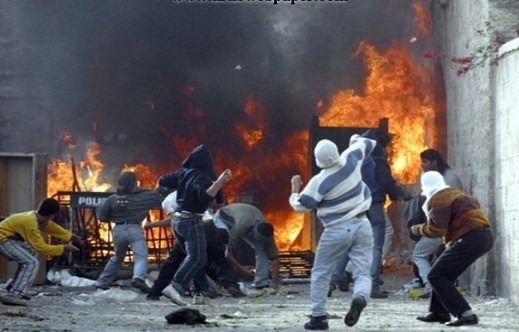 Tuesday evening [September 24, 2013] Palestinian medical sources have reported that at least 25 Palestinians have been injured during renewed clashes that took place in Bab Az-Zawiya and Shallala Street, in the center of the southern West Bank city of Hebron.Eyewitnesses said that the soldiers fired rounds of live ammunition, rubber-coated metal bullets, gas bombs and concussion grenades leading to more than 25 injuries.

They added that Palestinian security officers in the city tried to prevent dozens of residents from reaching the clashes area, but the residents pushed through.

Furthermore, several soldiers occupied rooftops of high buildings in the city, used them as monitoring towers, and fired rounds of live ammunition at the protesters.

In addition, clashes took place near the main entrance of the Al-Fawwar refugee camp, south of Hebron, while the soldiers also installed several roadblocks in several areas in the city, and around it, closing the entrances of several villages and towns.

The soldiers stopped and searched hundreds of vehicles, and interrogated the residents, especially near Ath-Thaheriyya town, the main road leading to the Shajna Valley, Karma area, and the As-Sammoa’ village.

According to eyewitness accounts in the Al-Fawwar refugee camp, soldiers fired dozens of rubber-coated metal bullets, and gas bombs, at dozens of protesters in the area, while dozens of soldiers were deployed in Palestinian farmlands and streets in the area.

Israeli military sources said that the army is operating in the occupied city in an attempt to locate the Palestinian sharpshooter who shot and killed an Israeli soldier in the city on Sunday.

Following the fatal shooting of the soldiers, the army carried out a large search campaign, kidnapped dozens of residents, and interrogated them, before releasing some of them later on.

According to Israeli reports, the Israeli Security Agency (Shabak) believes that the sharpshooter is still somewhere in Hebron, while Givati and Nahal units of the army are searching hundreds of homes in an attempt to locate him.