23 Palestinians Injured During Clashes In Hebron 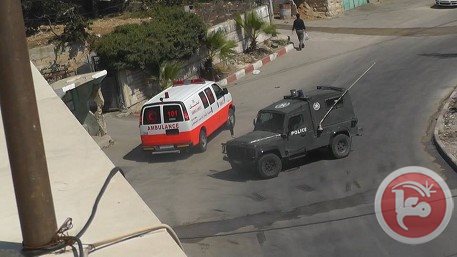 Friday evening [September 27 2013] Palestinian medical sources have reported that 23 Palestinians, and three Israeli soldiers, have been injured during clashes between Israeli soldiers, in Hebron and nearby areas.The Palestinian Red Crescent said that 15 of the wounded were injured in the Shallala Street, in the center of Hebron, and were moved to the Hebron Governmental Hospital.

Three of the wounded have been shot by live rounds, and suffered moderate injuries, while 12 were mildly injured by rubber-coated metal bullets.

Eight more Palestinians were injured during clashes that took place north of Halhoul city, and were moved to a local hospital. One of the wounded was shot by a live round resulting in a moderate injury.

Red Crescent medics also provided several residents with the needed treatment after they suffocated due to the effects of teargas inhalation.

Local sources said that dozens of Palestinian youths hurled stones and empty bottles at the illegal settlement outpost of Beit Romano, in the center of Hebron.

Soldiers fired rounds of live ammunition, concussion grenades and gas bombs leading to a number of injuries, the Maan News Agency has reported.

Furthermore, a number of soldiers attacked a Palestinian man as he was working in his land, near the Al-Fawwar refugee camp, and forced him to leave his land after threatening to shoot him.

On Saturday, a seven-year-old child lost his right eye after being shot with a rubber-coated metal bullet fired by an Israeli soldier in Al-Fawwar refugee camp, south of the southern West Bank city of Hebron.

The child lost his eye and was moved to the Saint John Eye Hospital in East Jerusalem.

In related news, dozens of soldiers invaded, on Saturday at dawn, Arraba town, south of the northern West Bank city of Jenin, and kidnapped four Palestinians.

The army violently broke into their homes, ransacked the property and took them to military base in the area.
Furthermore, a number of extremist Israeli settlers attacked two Palestinian children in the Sharaf Neighborhood, in occupied East Jerusalem.

The father said that his daughters, Ghada and Thikra Abu Rmeila, were heading to school using the same path they take every day, before a number of settlers attacked and punched them, and used foul language, the Palestinian News & Info Agency WAFA has reported.

The two sisters had to return home in Silwan, south of the Al-Aqsa Mosque in the occupied city.