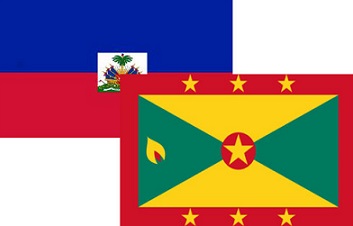 [Saturday September 28, 2013] The Republic of Haiti and the State of Grenada has officially recognized Palestine as a state, and expressed significant interest is strengthening the relations with the occupied State of Palestine.Palestinian Foreign Minister, Riyadh Al-Maliky, stated that the official recognitions came during official signing ceremonies between Palestine and the two countries.

The two officials said their countries are interested in in boosting their relations with the State of Palestine.
Al-Maliki thanked the two officials, and stated that those agreements will help Palestine in its international relations.

He added that this recognition comes as part of the international recognition of the legitimate Palestinian rights of independence and statehood.

Haiti was the first country to successfully overthrow the colonial regime of France with a slave revolt in 1791.

Grenada, also a former colony of France and Great Britain, gained independence in 1974, and was occupied by the United States in the 1980’s.