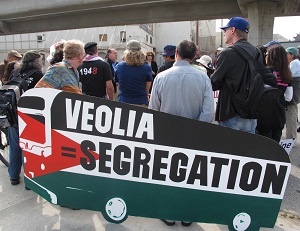 After a campaign beginning more than six years ago, activists with the global Boycott, Divestment and Sanctions movement have declared a major victory this week, when the French transportation company Veolia Transdev (partially owned by environmental services company Veolia Inc.) sold off its bus lines which operate in the Israeli-occupied Palestinian Territories.Veolia remains a target of the boycott and divestment campaigners, however, as the main owner/operator of the Tovlan Landfill, and the provider of wastewater services to the illegal Israeli settlement Modi’in Ilit.

The activists began targeting the company when Israeli supporters of the movement researched the owners of the segregated bus lines that run from Israel into the settlement colonies constructed throughout the West Bank and East Jerusalem in contravention of international law. These buses are ‘Jewish-only’, and Palestinians who attempt to ride on them are arrested. The Israeli activists published their findings on the website http://www.whoprofits.org, and global activists began to protest the French parent company, as well as the subsidiary that owned the bus lines until it divested this week.

Although no reason was given for the sale, activists with the BDS movement say that they believe it was the years-long international pressure campaign that pushed the company to divest. The campaign writes on their website, http://www.bdsmovement.net, “In the U.S., member groups from Los Angeles to Boston have taken Veolia to task in their city councils and municipal departments. Peace-seeking Quakers achieved divestment from Veolia, while member groups in Yolo and Sonoma Counties, CA, and St. Louis, MO celebrated local victories and major breakthroughs catching the attention of Israeli officials, Veolia headquarters, mayoral candidates, and popular media.

“These activities, combined with parallel campaigns across the world, have imposed a significant cost to Veolia for its ongoing participation in Israel’s occupation and apartheid policies — a cost that Veolia can no longer ignore, as evidenced by the recent news.”

The global Boycott Divestment and Sanctions movement aims to use economic pressure to get the Israeli government to adhere to its obligations under international law, and end the military occupation of Palestinian land, and the transfer of its civilian population into illegal settlements constructed on stolen Palestinian land.

The movement takes its inspiration from a similar campaign in the 1970s and 80s focused on the discriminatory and racist system of government in South Africa at the time, known as ‘apartheid’. The anti-apartheid movement included an economic boycott of companies invested in the apartheid system, as well as an academic, cultural and sports boycott, in which academics and athletes from South Africa were shunned at world events. This pressure campaign contributed to the downfall of the apartheid regime, which ended in 1994.