Settlers Clash With Palestinians In Nablus 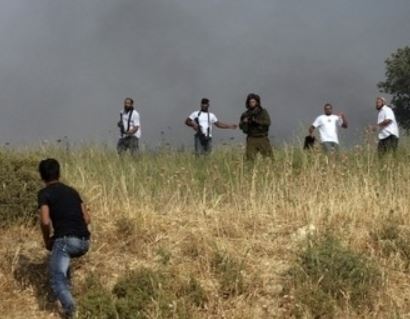 Sunday evening [September 29, 2013], local sources have reported that a number of extremist Israeli settlers of the Bracha illegal settlement, clashed with Palestinian youths in Burin village, south of the northern West Bank city of Nablus.Head of the Burin Village Council, Jamal Zeben, stated that the extremists attacked several Palestinian homes in Jabal As-Sabe’, in the eastern part of the village, and hurled concussion grenades at a number of homes.

He added that dozens of local youths confronted the settlers, threw stones at them, and chased the assailants out of the village.

The official further stated that, unlike daily scenarios, Israeli soldiers could not be seen in the village, and around it.

On Sunday evening, a Palestinian worker was injured after being rammed by a settler’s vehicle, near Husan town, west of the West Bank city of Bethlehem.