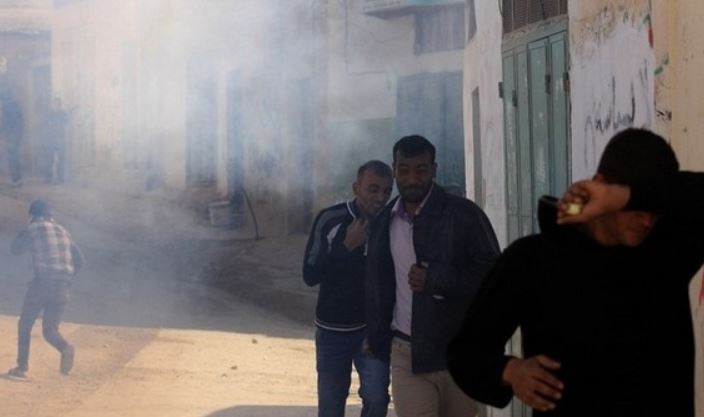 [Sunday September 29, 2013] Dozens of Israeli soldiers invaded Abu Dis town, east of occupied Jerusalem, and clashed with local youths who hurled stones and empty bottles at them.Hani Halabiyya, Coordinator of the Popular Committee and the Wall and Settlements in Abu Dis, told the Radio Bethlehem 2000 that the army invaded the town from an area close to a building owned by the Al-Quds Open University.

He added that the army carried construction materials, and tried to close a hole that was dug by local youths in the Annexation Wall, in their town, last Friday.

The soldiers had to retreat from the town without being able to close the hole after dozens of residents hurled stones and empty bottles at them.

Soldiers fired dozens of gas bombs, concussion grenades and rubber-coated metal bullets at the residents; some residents suffered the effects of teargas inhalation.

In related news, soldiers kidnapped a Palestinian child in Beit Ummar, north of the southern West Bank city of Hebron.

Mohammad Awad, Coordinator of the Popular Committee against the Wall and Settlements in Beit Ummar, stated that the soldiers kidnapped Mohammad Sabarna, 14, as he was heading home from school, and took him to the Etzion military base.