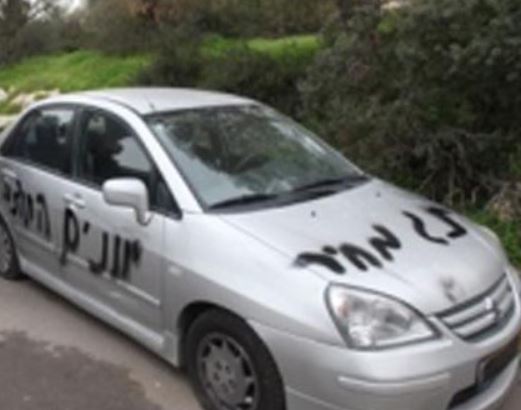 Using screwdrivers and iron bars, a group of extremist Israeli settlers damaged and defaced, on Sunday night after midnight, eight Palestinian cars in Sheikh Jarrah, in the center of occupied East Jerusalem, The Israeli Police initiated an investigation, and said that two extremists have been apprehended on suspicion of participating in the attack.

Local sources said that the settlers came from the illegal outpost that the settlers created after illegally occupying several homes that belong to the Al-Kord, Hannoun and Al-Ghawy families that were forced out of their homes earlier this year.

The sources added that extremist settler groups claimed ownership of the lands where the Palestinian homes in question are built, and “converted an Islamic site into a Jewish site known as Shimon HaTzadik”, the Palestinian News & Info Agency (WAFA) has reported.

The Jerusalem City Council then decided grant the area the name of “Shimon HaTzadik”.

Also on Sunday, a group of Israeli extremists broke into a Christian Cemetery in occupied Jerusalem, and destroyed several gravestones before Israeli police officers chased, and apprehended them.