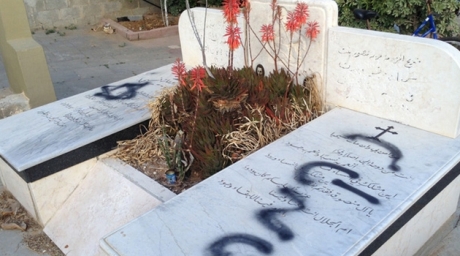 Sunday [September 29, 2013] A number of Israeli extremists invaded a Christian Cemetery in occupied Jerusalem, and destroyed several gravestones before Israeli police officers chased, and apprehended them.The Radio Bethlehem 2000 has reported that four students of a Jewish Yeshiva in the area carried out the attack. Their ages are between 17 and 26.

It added that the assailants destroyed 15 gravestones in the Evangelical Lutheran Cemetery in the King David Tomb.

The Israeli Police said that two of the apprehended Israeli assailants are members of the Hilltop Youth Movement, an extremist group of Israeli settlers responsible for numerous attacks against Palestinian lands and property.

The two have previously been apprehended by the Israeli Police in the West Bank, and were ordered out of the area due to their illegal activities, but they violated the order and the police failed to apprehend them.

Earlier on Monday, the Police apprehended two Israeli teenagers, 14 and 16 years of age, on suspicion of being involved in defacing and damaging eight Palestinian cars, near Nabi Saleh Graveyard, in occupied Jerusalem.

Nearly a week ago, Price Tag graffiti was also found on the outer walls of a Church in the Old City of Jerusalem. Settlers also punctured tires of 28 Palestinian cars, and wrote racist graffiti in Abu Ghosh.

A month ago, a Christian Monastery in the Deir Jamal area, between Jerusalem and Ramla, was attacked by a Molotov cocktail, while racist graffiti, used by Price Tag extremist Israeli groups, were found on its exterior walls, the Arabs48 news Website has reported.

In mid-June, a number of extremist settlers wrote racist graffiti on some graves at the Christian Greek Orthodox graveyard in Jaffa [on Wednesday at night].

Racist graffiti was also found on a wall of a building inhabited by the head of the Orthodox Society in Jaffa, and even wrote graffiti on the wall of the home Khaled Kaboub, an Arab District Court Judge in Tel Aviv.

There have been hundreds of similar attacks, that also included burning and trying to burn Churches and Mosques in different part of Palestine, in addition to numerous attacks targeting both Islamic and Christian graveyards.

Those attacks are part of ongoing violations that also targeted Palestinians lands and orchards in which the settlers uprooted and burnt hundreds of Palestinian trees, and flooded farmlands with waste-water.