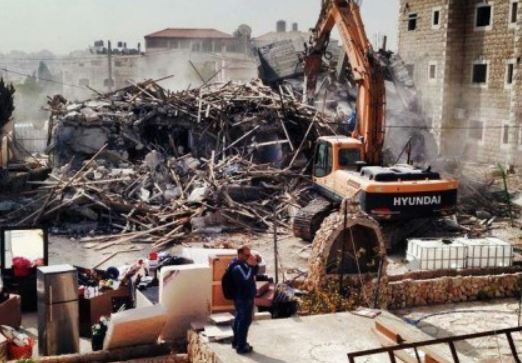 [Sunday November 10, 2013] Palestinian sources have reported that Israeli soldiers invaded the Al-Isawiyya town, in occupied East Jerusalem, and handed destruction orders targeting a home, and a residential building, allegedly for being built without permits.Member of the Follow-up Committee in the town Mohammad Abu Al-Hummus stated that dozens of soldiers, police officers and City Council employees invaded the town and handed the orders.

He said that an order was handed to resident Hasan Abu al-Hummus targeting his home where seven family members live.

Soldiers also invaded a residential building of four apartments, took photographs of the building, all apartments, and all of its facilities. The building is also facing destruction under same claims.

Furthermore, dozens of soldiers invaded al-Anayta Road and nearby lands, as Israel intends to illegally confiscate lands to create a trash dump-site.

In a previous report, the Israeli Committee Against House Demolitions (ICAHD) has reported that Israel demolished more than 27.000 Palestinian homes and structures since the 1967 six-day war when it occupied the West Bank, East Jerusalem, and the Gaza Strip.

Home demolition is an act of collective punishment that affects entire families, and act that directly violates International Law and the Fourth Geneva Convention to which Israel is a signatory.

While Israel continues to deny the Palestinians in Jerusalem the right to build or even modify their homes, it continues to build and expand its illegitimate settlements in the city and the rest of the West Bank.