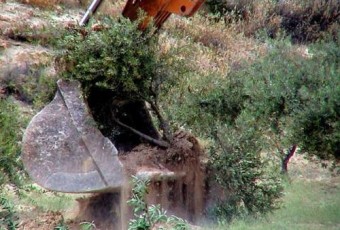 Eyewitnesses have reported Saturday [November 9 2013] that a number of extremist Israeli settlers invaded Palestinian lands west of the central West Bank city of Salfit, bulldozed them and installed a number of mobile homes in an attempt to expand their adjacent Revava illegal settlement.Head of the Deir Estia town council Ayyoub Abu Hijla stated that the lands are located in the western side of the town, and that the settlers are continually trying to expand their illegal settlement.

Palestinian researcher Khaled Ma’aly said that Revava is one of 23 illegal Israeli settlements in the Salfit District, and was established on lands that belong to Deir Estia residents in 1991, preventing any expansion of the town.

Ma’aly added that the settlers also bulldozed and uprooted more Palestinian lands close to other settlements near Salfit, including lands near the settlements of Leshim, Brokhin and Borkan, and are building new units there.

In related news, extremist settlers attacked a number of residents in Burin village, south of Nablus.

The settlers invaded areas on the edges of the village, and clashed with local residents.