Dozens Of Palestinians Injured In Jerusalem 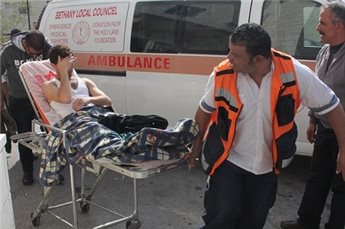 Palestinian medical sources have reported that dozens of Palestinians have been injured by Israeli gas bombs and concussion grenades during clashes with Israeli soldiers invaded, on Sunday, in Abu Dis town in occupied East Jerusalem. Spokesperson of the Popular Resistance Committee in Abu Dis Hani Halabiyya stated that dozens of soldiers invaded the town to install electric barbed wire fence at a section of the Annexation Wall that was recently breached by local youths.

Halabiyya added that the army took place as schoolchildren, in nearby schools, were just leaving school, and that the army attempted to invade the university campus but faced dozens of protesters.

The soldiers managed to break into the university mosque after firing dozens of gas bombs.

The attack led to clashes with dozens of students who hurled stones and empty bottles at the invading soldiers, while the soldiers fired rubber-coated metal bullets, glass bullets, and concussion grenades.

Halabiyya said that at least 40 Palestinians, including university students who were shot with rubber-coated metal bullets, while dozens suffered the effects of tear gas inhalation. Some of the wounded were moved to medical centers in the area.