Racist Graffiti Found On Islamic Tombstones, Nearby Structures, In Jerusalem 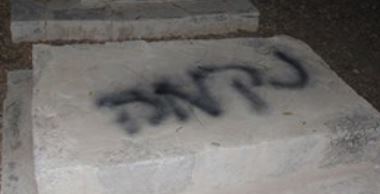 Israeli sources reported Sunday [November 17, 2013] that a number of extremist Israeli youths invaded an Islamic graveyard in occupied Jerusalem, broke tombstones and wrote racist graffiti on tombstones and buildings adjacent to the graveyard.The sources said that the settlers wrote “Death to Arabs”, “Revenge” and “Price Tag” on a number of graves and buildings, and drew the Star of David, the Maan News Agency has reported.

The Israeli Police in the occupied city said it initiated a probe into the matter, and managed to apprehend two settlers, 16-17 years of age, believed to be involved in Price Tag attacks against the Palestinians.

In related news, a number of extremist settlers cut around 106 olive trees in the Qawawees area east of Yatta, in the southern West Bank district of Hebron. The trees belong to resident Abdulnabi Makhamra.

Such attacks dangerously escalate every year, especially during and before the olive harvest season in the West Bank, and include cutting and removing newly planted trees, cutting ancient trees in some areas, in addition to cutting and burning crops, farmlands and orchards.

The settlers invaded the village during the early dawn hours, burnt two cars, and wrote racist graffiti in the area.

They also wrote graffiti insulting Islam and the Muslim Prophet, Mohammad, in addition to writing other racist Price Tag graffiti on the front outside wall of the local mosque.

The settlers tried to smash the mosque’s main door, but a number of residents were inside, noticed them, and chased them away.

Less than months ago, Israeli extremists invaded a Christian Cemetery in occupied Jerusalem, and destroyed several gravestones before Israeli police officers chased, and arrested them.

It is worth mentioning that extremist settlers are responsible for dozens of attacks against Islamic and Christian holy sites, including ancient places of worship, and several graveyards in the area.