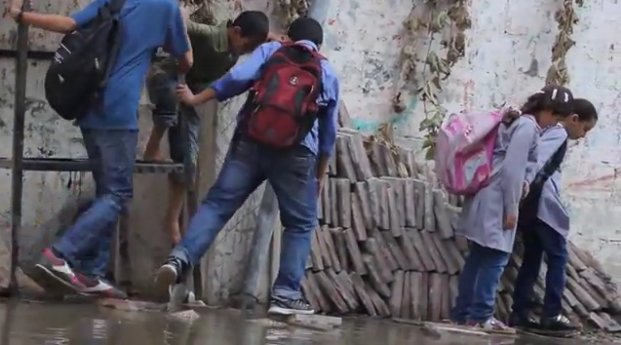 As a consequence of the recent Israeli and Egyptian clampdown on the tunnels under the border between Gaza and Egypt, fuel has become exceedingly scarce in Gaza, and a major waste treatment plant in Gaza City has shut down, leading to floods of sewage in the city streets.The plant shut down on Wednesday November 13th, and has remained offline since then. The most severely impacted area is the Al Sabra neighborhood, which has several feet of raw sewage covering the streets of the neighborhood.

Palestinians living in Gaza depend on the tunnels to provide food, fuel and other supplies since the Israeli blockade has closed the border.

Because of the sewage treatment plant shutdown,hildren have had to wade to school through the sewage. Medical personnel note that the health implications of the raw, open sewage flooding the streets are disastrous. An estimated 20,000 people live in the contaminated area.

The organization Medical Aid to Palestinians warned on November 7th, “Medical Aid for Palestinians is calling for immediate action to enable Gaza’s power plant to resume its operations. The shut-down of the plant is having a serious impact on the ability of hospitals and primary healthcare clinics to provide essential services.

“The power plant has been out of action for a week, due to a critical fuel shortage. Normally, Gaza needs more than 320 megawatts of electricity. With the closure of the plant, it has less than half the electricity it needs – with 120 megawatts coming from Israel and 27 megawatts from Egypt.

In addition to the shutdown of the wastewater treatment facility, the lack of fuel has led to a critical situation for Gaza’s hospitals, which have become dependent on generators to provide power for lifesaving medical equipment. Now that blackouts in the city are nearly continuous, the dependence on the generators has become even greater, and very little fuel remains.

A representative for the Gaza municipality, Sa’ad El-Deen Al-Tbash, told reporters from the Reuters news agency on November 14th, “This is the start of a catastrophe and unless the world listens to our cries, a real disaster may hit Gaza and its people”.

Analyst Juan Cole pointed out in a November 18th article on the Gaza crisis, “US State Department cables revealed by Wikileaks show that the Israelis are deliberately keeping the Palestinians of Gaza just on the verge of a humanitarian catastrophe. As a result, 56 percent of residents are ‘food insecure.’ They aren’t starving but they are just one or two lost paychecks away from starving. This kind of social engineering experiment on human beings (i.e. keeping Palestinians “on a diet”) is unconscionable to anyone in their right mind. It is also illegal in international law to impose collective punishment on an Occupied population.”