Woman Injured After Being Hit By Settler’s Vehicle 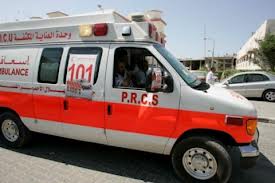 [Nablus – Tuesday Evening, November 19, 2013] A Palestinian woman was wounded after being rammed by the speeding vehicle of an Israeli settler, near the northern West Bank city of Nablus, Palestinian medical sources have reported.Sources state that Shamsa Sharif, 60 years of age, was moved to the Rafidia Hospital in Nablus, suffering moderate but stable injuries. Sharif is from Huwwara village, south of Nablus. The settler fled the scene after the incident.

There have been numerous similar hit-and-run incidents in different parts of the occupied West Bank, mainly in the Hebron district in the southern portion of the West Bank.

On November 19, 2013, a young woman identified as Zeina Omar Awad, 21, was injured after being rammed by a settler’s vehicle at the main entrance of Beit Ummar. She suffered cuts and bruises, while the settler fled the scene.

On October 16, 2013, an elderly Palestinian man was seriously injured after being hit by a settler’s vehicle in Al-Fondoq village, east of Qalqilia, in the northern part of the West Bank.

On September 29, 2013, a Palestinian worker was injured after being rammed by a settler’s vehicle, near Husan town, west of the West Bank city of Bethlehem.

On September 20, a Palestinian man was injured in a similar accident with an Israeli settler who fled the scene.

A week before the incident took place, Palestinian child was severely injured after being hit by a settler’s vehicle as she was walking home from school in Teqoua’ village, near the West Bank city of Bethlehem.

The child, Hayat Mohammad Suleiman, 8 years of age, was walking back home from school on the main road that is also utilized by Israeli settlers living in illegal settlements in the region.