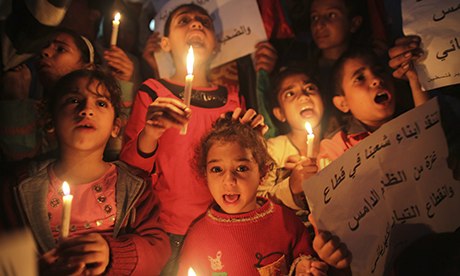 The Palestinian Prime Minister in Gaza, Ismail Haniyeh, announced Monday that his government is working with the Fateh party which controls the West Bank to try to re-supply Gaza’s main power plant with fuel, after a month without power led to sewage flooding from its water treatment plant.The main power plant in the Gaza Strip supplies power to more than 30% of its population of 2.5 million people, as well as providing the power for the main wastewater treatment plant in Central Gaza.

Although Gazans have endured rolling blackouts six to twelve hours a day for the past seven years, since the Israeli siege on the coastal Strip began, the complete shutdown of the main power plant has been devastating for the residents of the central Gaza Strip.

In a statement to the press on Monday, Ismail Haniyeh stated, ‘There is ongoing cooperation, between us and the West Bank government, aimed at ending the electricity crisis in Gaza and resuming the fuel supplies needed to run the power plant’.

The statement came after the West Bank’s Prime Minister (of the Fateh party) Rami Hamdallah left on a trip to Qatar to try to obtain financial support in re-supplying the power plant.

The cooperation between the two rival parties, even if successful, will depend on the cooperation of the Israeli occupying powers to allow the fuel to enter the besieged Gaza Strip, whose air, sea and borders are controlled by the Israeli military.