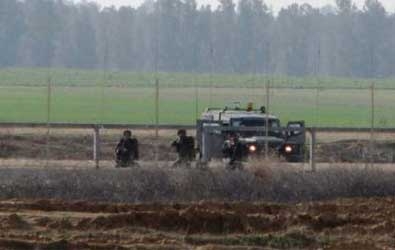 [Friday Morning November 29, 2013] Israeli soldiers, stationed across the border with Gaza, opened fire at Palestinian farmers working in their lands, east of Khan Younis, in the southern part of the Gaza Strip.Local sources have reported that the farmers were only working on their lands when the soldiers fired several rounds of live ammunition at them. Fearing additional fire, the workings ran out of their lands.

They stated that the army frequently carries out invasions targeting border areas, and repeatedly opens fire at the workers and farmers.

A few days ago, a resident of Khan Younis was shot and injured after Israeli soldiers opened fire at him as he worked in his land close to the border fence.

The Israeli Navy also frequently attacks Palestinian fishermen, and fishing boats, leading to numerous casualties, while dozens have been kidnapped, their boats have been confiscated, and dozens of boats were damaged.

Last week, Israeli navy forces kidnapped two fishermen were off the fishing port in Rafah in the south of the Gaza Strip.