Due To Israeli Restrictions, Child Dies In Ambulance 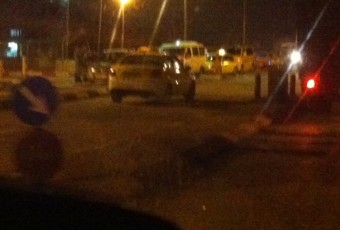 Thursday Evening [November 28, 2013] A Palestinian child has died, as an ambulance transporting her to the Beit Jala Hospital, in the Bethlehem District, was delayed at an Israeli military roadblock, Palestinian medical sources have reported.The child, Nour Mohammad Affana, 14, suffered with a severe case of pneumonia.

The Palestine News Network (PNN) stated that a physician first examined her and, then, decided to move her to the Intensive Care Unit in Beit Jala Hospital. Her father said that, after an ambulance tried to transport her to ICU through the Container Roadblock (the main roadblock to the east of occupied Jerusalem which splits the occupied West Bank), the entire area became jammed with cars as the soldiers closed the roadblock, and the ambulance could not get through. The ambulance then tried to take a bypass road, near the Kidar Israeli settlement, but was unable to do so, and decided to drive to the Ramallah Governmental Hospital.

The child passed away just minutes before arriving at the hospital.

He added that the Jerusalem City Council has been doing some work on the main road heading to nearby Al-Ezariyya town, removing two stop signs from the road and placing them at the Qidar-Ma’ale Adumin settlement junction, thus widening the main road.