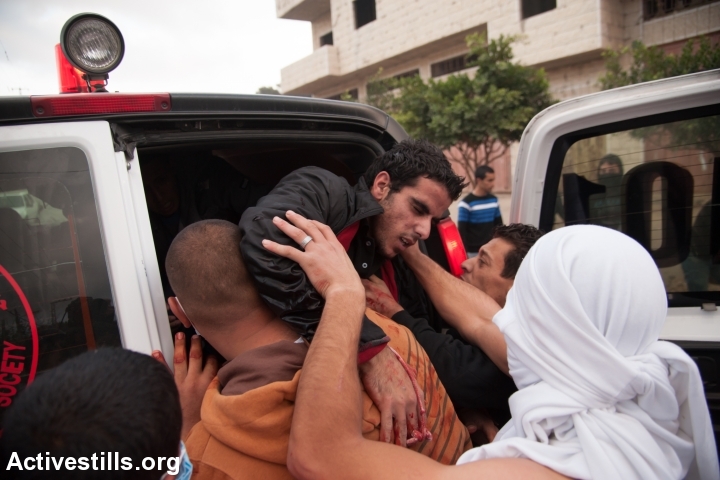 As Palestinian protesters took to the streets, Friday, to bring attention to the death of a Palestinian child at an Israeli military checkpoint, Thursday, two protesters were shot with live ammunition in two separate locations, near Jerusalem.In Abu Dis, a protester was hit with three bullets in the lower extremities while, in al-Azariya, Israeli troops shot a protester in the chest and leg, also with live ammunition. According to the spokesperson of the Popular Committee Against the Wall and Settlements, Hani Halbiya, the shots were fired at the demonstrators by Israeli snipers stationed on rooftops.

The protests were spontaneous marches in the streets, involving the chanting of slogans and raising handwritten signs protesting the death of the child Nour Afaneh the previous night. Israeli sources have alleged that some of the youth involved in the protests also threw stones at the Israeli troops, who arrived at the scene of the protests with armed personnel carriers and machine-gun mounted jeeps.

The child died on the way to the hospital when her ambulance was delayed at an Israeli military checkpoint, in the Bethlehem area. She was 14 years old and suffering from a severe case of pneumonia.

Deaths of patients at Israeli checkpoints were frequent during the second intifada, which lasted from the year 2000 to approximately 2006. In the last two years, with the easing of some military checkpoints in the West Bank, such deaths have become less frequent. But the checkpoints which remain have become like border crossings, making it extremely tedious and time-consuming to cross them.

In this case, a checkpoint that has remained open for most of the last two years was closed by Israeli troops, to mark the beginning of the Jewish holiday of Hanukkah. The ambulance was stuck at the Container checkpoint for several hours, and the child died as a result.