Farmers Prevented From Reaching Their Lands In Yatta 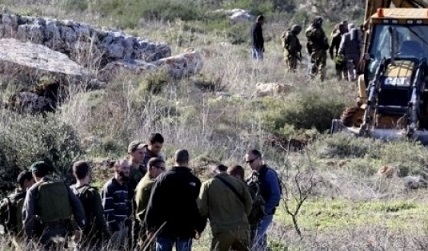 [Saturday, November 30, 2013] Israeli soldiers have attacked several Palestinian farmers, southeast of Yattat town, south of the southern West Bank city of Hebron, and prevented them from entering their lands.Coordinator of the Popular Committee against the Wall and Settlements in Hebron, Rateb Jabour, said that the soldiers attacked members of the Awad family as they were heading to their farmlands, in Khirbit Um Al-‘Arayes area, and denied them passage.

The army claimed that the area had been declared a “closed military zone”, and forced the villagers away.

Jabour denounced the escalating Israeli intrusions, and stated that Israel is violating every aspect of life, affecting the social, economic, agricultural, educational and health sectors, in an effort to drive the Palestinians out of their homes and lands.

On Friday evening, at least 25 Palestinians were shot with rubber-coated metal bullets, while dozens have been treated for the effects of tear gas inhalation, suffered during clashes with invading Israeli soldiers.