I Am From Jaffa, Was Only Five When We Were Displaced 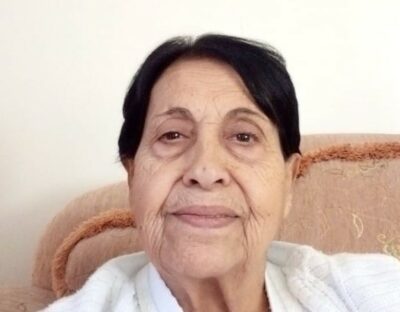 I was video chatting with my family back in Beit Sahour, in the West Bank district of Bethlehem, chatting with my mother and family members back there, despite the 10-hour time difference, we try to do that whenever we can.

My mom sounded happy about something, of course, I felt happy for her happiness, after all she is my mother, who gave birth to me and, along with my father, raised me and my three brothers, and always put us first.

Mariam, my mother was carrying a copy of the Al-Quds daily Newspaper, my father Naji standing next to her, and she showed me a feature story about the destroyed Palestinian village of Al-Khairiyya in the Jaffa district, one of hundreds of villages and towns destroyed and depopulated by Zionists in 1948.

“I was only five years old when they came into our village and forced us out, we lost our home and land, our life where my late father worked”, she said, “We went to ‘Aboud village, near Ramallah, but the village was so small, people unable to find work to feed their families”.

“In 1963 I studied to be a nurse and became a midwife, I used to be fluent in English, I later learnt French, and spoke some Russian”, she said, “I am from Jaffa, but I cannot go there any more, they [Israeli soldiers] destroyed our village, our home and displaced us to create their state”.

“When I saw the article about my village, my destroyed and depopulated village, I felt happy to hear about the forgotten village, but very sad for what happened to it, for the displacement and destruction they did, for my expulsion from my land, my home”, Mariam said, “This is my village, my village that once stood filled with life, where I took my first steps… now it’s gone..”

It is worth mentioning that, similar to thousands of unrecognized refugees, the United Nations Relief and Works Agency for Palestine Refugees (UNRWA), only recognized my mother as a refugee three years ago.

“This is my country, my home, nothing can compensate that”, she said, “The UNRWA provides me with some medications for chronic conditions, but now it is trying to reduce, or even cut, services due to American and Israel campaign against the UN for recognizing Palestine as a state under occupation”.

My mother’s story is just one of thousands of stories of Palestinians, who once had homes and lands, who had jobs and lives, and were turned into refugees, displaced persons, forgotten…so that Israel can be established in a land that was once filled with life and people, its people, the indigenous Palestinians.

It was completely displaced, and destroyed by the Zionist armed forces in 1948 when Israel was established in the historic land of Palestine, a land with great culture, people and life, but the Zionists wanted it without its natives, the Palestinians, the indigenous.

Israel, the newly born state established on the ruins of Palestine and its people, built two illegal settlements where Al-Khairiyya once stood; Ramat Bin Kaas and Ramat Efal, where immigrants called what once stood as a Palestinian village, home. The first settlement was built in 1952, and the second in 1969.

Now, anyone who visits that area, as well as any part of historic Palestine, mainly sees Jewish neighborhoods, cities, and does not have a clue about what happened here, what happened to the native indigenous Palestinians, their hundreds of villages and towns.

My mother started suffering from several chronic conditions when I was shot and nearly killed by undercover soldiers of the Israeli military in 1991.

That day left me paralyzed for life, broken ribs, broken jaw, and with at least one-third of my right lung removed after it was riddled with bullets.

I was 18, fully healthy, when an undercover soldier filled with hatred shot me five times [those were only the counted bullets found in my chest not the ones that went through], in my chest and back, and proceeded to kick me breaking four of my ribs.

He was a coldblooded murderer who became so angry when I refused to die, and shouted at me, “after all what we did, and you are still alive?!”.

Nevertheless, I lived to tell my story, to tell the story of my mother, to tell the stories of millions of Palestinians subject to Israeli crimes, massacres, constant harassment, displacement and fear.

We are Palestine, and they will never be able to wipe that out.

To my mother and father, to my brothers, I love you from all of my heart, you are my family that stood by me and gave me every reason to fight for my own life, to live and tell the truth, to expose the crimes of the occupation. You are the ones who continue to be there for me.

To my Palestinian people, remain steadfast, remain united, unity is power, peace in the land of peace, must prevail, and will only prevail once justice is achieved, and stolen rights are retrieved.

A Moment That Changed My Life
By Saed Bannoura – IMEMC News
http://www.imemc.org/article/10754