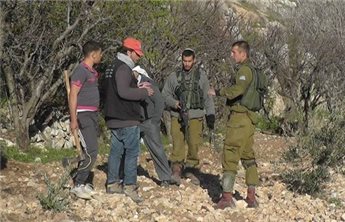 Israeli forces, on Saturday, prevented Palestinian farmers in the Hebron district from accessing their privately owned land, local popular committee spokespeople said.Nidal al-Haddar, a spokesman for the popular committee in the southern Hebron district, reported to Ma’an News Agency that Palestinian farmers were sent home at gunpoint when they attempted to reach their lands in the Umm al-Arayis, east of Yatta.

Separately, in Beit Ummar north of Hebron, Israeli forces sent home a farmer and his family as they were tending to their lands, a local popular committee spokesman said.

Muhammad Ayyad Awad told Ma’an that Muhammad Abd al-Hamid Jabir Sleibi and his family were working on their land when Israeli troops arrived and threatened to detain them if they refused to leave the area.

International solidarity activists were sent away as well, Awad said.

A spokeswoman for the Israeli army said she was unfamiliar with the incidents.

In related news, Ma’an reports that Israeli settlers, on Saturday, assaulted two Palestinian shepherds while they were tending their sheep in the village of Tuqu, east of Bethlehem, according to relatives.

Arif Ayish Ubayyat, 23, and Ayyub Hasan Ubayyat were pasturing their sheep in the Romman area east of Tuqu when a group of settlers attacked them.

Arif sustained bruises and lost 17 sheep during the attack. He was subsequently taken to a local clinic, in Tuqu, for treatment.

More than 500,000 Israeli settlers live in illegitimate settlements across the West Bank and East Jerusalem, in contravention of international law.