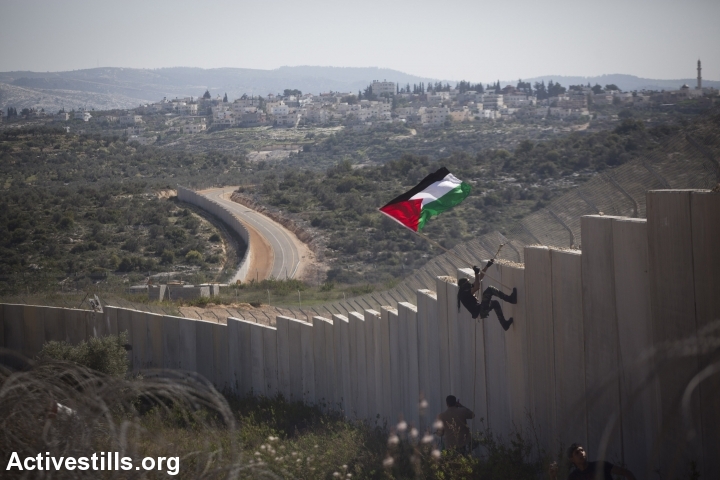 Local sources report that at least 14 civilians were injured, and many others were treated for the effects of tear gas inhalation, on Friday, when Israeli soldiers attacked anti-wall non-violent protests organized in West Bank villages, using tear gas and rubber-coated steel bullets.
Protests were organized on Friday, in the village of Qarout, in the northern West Bank, the villages of al Nabi Saleh, Bil’in, Nil’in, central West Bank, and Al Ma’ssara village, in the southern west Bank.

At least 10 civilians were injured due to Israeli attacks against a protest organized by the villagers of Qarout. Residents tried to reach lands outside the village, to plant olive trees, when they were attacked by soldiers, local sources reported.

Elsewhere on Friday, Israeli soldiers used tear gas and sound bombs, as well as chemical water, to attack the weekly anti-wall and settlements protests at villages of Bil’in and Ni’lin, and nearby al Nabi Saleh.

In Bil’in and Ni’lin, Israeli soldiers attacked the protesters as soon as they reached the gate of the wall which separates local farmers from their lands. Four civilians were mildly wounded in Bil’in village by the army attack. Many were treated for the effects of tear gas inhalation in both villages .

At the same time, in the nearby al Nabi Saleh village, troops attacked the unarmed protesters before even leaving the village. Later, soldiers stormed the village and fired tear gas into residents’ homes causing property damage.

Meanwhile, Israeli troops attacked the villagers of al Ma’ssara and their supporters, at the village entrance, and then forced them back using rifle butts and batons; no injuries were reported.