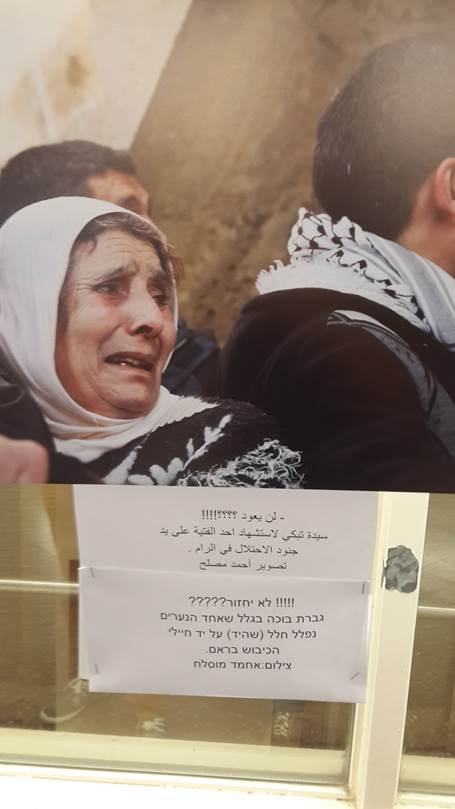 A week of events organized to bring attention to Israel’s practices and policies which resemble the South African race-based system known as apartheid were held at hundreds of universities from March 2nd to 7th 2014. Among the universities that held events this year was the Israeli Hebrew University in Jerusalem, where a photo exhibit documented some of the issues faced by Palestinians living under occupation.The week of film screenings, cultural events, discussions and lectures was meant to draw attention to the parallels between the Israeli policies, including the more than fifty Israeli laws that explicitly discriminate against Palestinians; and the South African system of apartheid, which blatantly discriminated against black South Africans until it was abolished in 1994.

2014 marks the tenth year that students and activists have organized the week of action known as ‘Israel Apartheid Week’, and one of the biggest participants is South Africa, where the week of events will take place from March 10th to 16th.

According to South African organizers, “For us South Africans and our liberation, people of the world mobilized in their hundreds of thousands – if not millions – during the 1980s. Across the world people held protests, rallies, concerts, free Nelson Mandela events, lectures, film screenings and a host of other events, actions and campaigns to raise awareness of Apartheid South Africa’s racist policies and to build support for the boycott, divestment and sanctions (BDS) campaign against Apartheid South Africa. Today we have an opportunity to ‘give-back’ by joining the growing international movement in solidarity with the indigenous Palestinian people (and their progressive Israeli allies) who are struggling against Israeli Apartheid.”

The South African organizers of the campaign to end Israeli apartheid-like practices and policies also note, “Hendrik Verwoerd, the architect of Apartheid, said in 1963: ‘Israel, like South Africa, is an apartheid state’”, adding, “In 2009, in a 300-page report commissioned by the South African government, the SA Human Sciences Research Council found that Israel is practicing a form of apartheid. This position was then confirmed by the Russell Tribunal on Palestine, which sat in Cape Town in November 2011. In March 2012 the United Nations Committee for the Elimination of Racial Discrimination made similar findings, and last month, on the 31st of January 2013, the United Nations Human Rights Council released a scathing report in Geneva, Switzerland, on the state of human rights in Israel, finding that a form of ‘institutionalized discrimination’ is practiced by Israel.”

In cities around the world, multiple events have been organized as part of Israeli Apartheid Week. In Toronto Canada, students organized a number of film screenings and discussions, including a discussion on ‘Pinkwashing, Homonationalism and Love under the time of Apartheid’. Universities from Paris, France to Sao Paolo Brazil have put together educational events and symposiums.

In Washington, DC, several organizations came together to organize the first First National Summit to Reassess the U.S.- Israel “Special Relationship” on March 7th at the National Press Club, which includes a long list of speakers addressing a number of topics regarding Israeli policies and the U.S. support for what the organizers say is a ‘special relationship’ with Israel that is harmful to U.S. interests.

Even in Israel, where talk about the Israeli occupation of Palestine is strongly discouraged and often criminalized, students at Hebrew University organized a photo exhibit to show some of what Palestinians experience under Israeli military occupation. The exhibit was strongly criticized by student representatives of the Israeli Likud party, who demanded that administrators remove the exhibit from the premises.