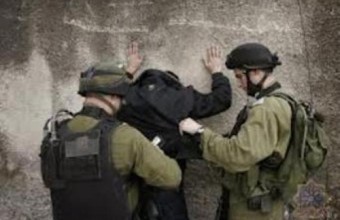 The Israeli army abducted, on Thursday, four Palestinians from the West Bank city of Jenin and its refugee camp.
The detainees were identified as: Ahmed Shafeeq Abu Zaina, 24, Khaled Saleh Abu Zaina, 54, and Tawfiq Saleh Jarbou’, 24, after raiding their raiding and searching their parents’ house, according to a report by the Palestinian News Network (PNN).

Additionaly, it was reported that Israeli forces took into custody Mahmoud Jihad Hthnawi, 26, after raiding his house in the city of Jenin.

Also raided was the village of Yabud, southwest of Jenin, where forces carried out a search campaign. No arrests were reported.

Sources added that several houses in the village of Durah were searched.

On Friday, Israeli occupation forces abducted a Palestinian from the city of Beit Sahour, east of Bethlehem.

Security sources said that Israeli forces took Fouad George Zablah, age 58, after raiding and searching his house. The forces also searched some of the vehicles in the vicinity of the house.

In a related context, the PNN reports that Israeli forces summoned 32-year-old Khaled Khalil Awadallah, from Beit Sahour, for interrogation with the Israeli intelligence at Gush Etzion settlement complex, south of Bethlehem.