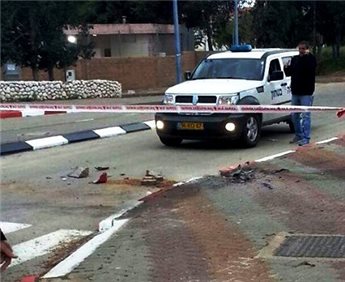 Dozens of rockets launched from the Gaza Strip landed in southern Israel, on Wednesday, a day after an Israeli airstrike killed three Palestinian militants in the Gaza Strip.(Ma’an) The al-Quds Brigades, the armed wing of Islamic Jihad, claimed responsibility for the attacks, saying: ‘The response has begun to the crimes of the occupation, the latest of which was the killing of three members’ of the group on Tuesday.

According to Israeli reports, rockets landed in open areas near the town of Sderot and near residential areas.

A senior Israeli security source told AFP that ’25 rockets were fired in close succession all over the south,’ including five towards Sderot, but that there were no immediate reports of casualties.

Warning sirens sounded in Israeli towns and cities near the border.

An Israeli officer told Israeli army radio that ‘we haven’t seen such a barrage (of rockets) in the last two years.’

Israeli police spokesman Micky Rosenfeld said that ‘damage’ had been caused but not injuries, and that ‘police units’ were searching ‘open areas.’

The three resistance fighters were killed by the airstrike in southeast Khan Younis near the Sufa crossing.

Also Tuesday morning, an Israeli drone fell in the area of the attack.

The airstrikes came just hours after Palestinian security sources said a man died after Israeli soldiers fired at him while he was driving near the West Bank city of Tulkarem.