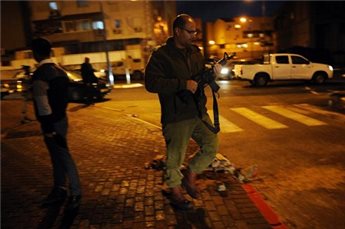 A senior Islamic Jihad official said, Thursday, that Egypt had managed to reactivate a ceasefire between Israel and Palestinian factions in the Gaza Strip.Khalid al-Batsh highlighted that his movement would adhere with the ceasefire ‘on condition that the occupation adheres’, according to a Ma’an news reports.

‘After prompt Egyptian efforts, the terms of the 2012 ceasefire were reactivated Thursday.’

A major eight-day confrontation in November of 2012, between Israel and militants from Gaza, claimed the lives of 177 Palestinians, mostly civilians, and six Israelis.

Hamas official Ghazi Hamad said Hamas had not been officially notified of the agreement.

Before the announcement Thursday, Israeli warplanes struck several targets in Rafah, in the southern Gaza Strip.

Al Ray reports that the Islamic Movement of Hamas holds the Israeli occupation responsible for the recent escalation against Gaza, over the last few days.

Spokesperson of Hamas, Fawzi Barhoum, said: “by this escalation, the occupation wants to impose a new equation, Resistance in Gaza had imposed a new equation after the last aggression against Gaza in November 2012.”

Barhoum added: “ Resistance and Palestinian people have the right to defend themselves. This escalation, in conjunction with the ongoing blockade on Gaza, would explode the situation in the face of all the hostile sides that impose siege on Gaza.”

He pointed out that Hamas enforces the “balance of terror” equation and will defend it vigorously.

According to Al Ray, leaders of the occupation forces will attend the meeting and propose their views “to respond” to the escalation in the Gaza Strip, according to Hebrew website, Walla.

Two days ago, Israeli occupation warplanes assassinated three fighters from al-Quds Brigades. As a result, the brigades responded to the attack.

In spite of the ceasefire signed between Palestinian resistance and Israel, after the aggression against Gaza in 2012, Israeli forces carry out daily violations by attacking Palestinians on Gaza borders and sea.

Reports have been surfacing, since the ceasefire announcement, of Israeli shelling and Palestinian retaliation. More on this via link below.