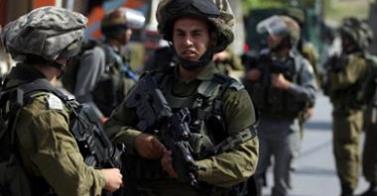 Al-Eesawy, the brother of former political prisoner, longtime hunger striker, Samer, was moved to an interrogation facility in occupied Jerusalem, according to the Wadi Hilweh Information Center, in Silwan.

The Center added that the soldiers repeatedly broke into the home of al-Eesawy, including last week, when they invaded the property and searched it.

Last week the army kidnapped lawyer Shireen al-Eesawy, the sister of Samer and Tareq, at a temporary roadblock, and moved her to an interrogation facility.

The army also invaded the home of their brother, Shadi al-Eesawy, of the Elia Association for Youth.

On Thursday, at dawn, several Israeli military jeeps invaded Jenin city, in the northern part of the occupied West Bank, kidnapping Mahmoud Maher al-Atrash, 31, from his home in the Kharrouba neighborhood.

Al-Hajj, who works with the Palestinian Ministry of Education, is a former political prisoner who spent 13 years in Israeli prisons.

The army also invaded and searched the home of former political prisoner, Dr. Mohammad Sayyed, in the same building. Sayyed is a teacher at the al-Quds Open University.

The arrest came only one day after al-‘Arouj was released from a Palestinian prison, following a period of detention by the Palestinian Preventative Security Forces.

His family said that several soldiers broke into their home, east of Bethlehem, violently searching it and causing property damage.

Al-‘Arouj has two brothers, Ibrahim and Ja’far, who are political prisoners held by Israel. He was also repeatedly kidnapped and imprisoned by Israel.

On Wednesday evening, the Israeli Police kidnapped Jawad Husam Abu ar-Rob from Qabatia town, near Jenin, as he was working in Haifa.

Soldiers conduct daily invasions, attacks and arrests in different parts of occupied Palestinian, installing roadblocks, and in many cases, surround entire communities in the West Bank.