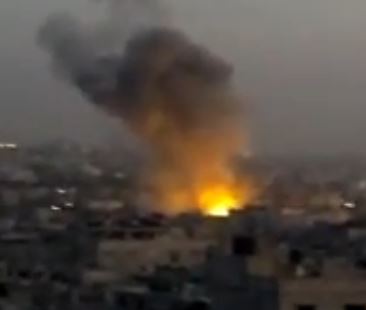 [Thursday, March 12, 2014] The Israeli army fired several shells into a number of areas in the Gaza Strip, causing power blackouts and property damage, in certain areas, but no injuries.The Palestinian News & Info Agency (WAFA) has reported that the army fired surface-to-surface missiles, and heavy artillery, targeting open areas in the coastal region.

WAFA added that, late on Wednesday at night, Israeli war jets fired two missiles into an area west of Rafah, in the southern part of the Gaza Strip, while a military helicopter fired missiles at a number of targets in northern Gaza.

The attack against Rafah led to a complete power blackout in the entire district in addition to damage to several homes.

On Wednesday night, Israel decided to close all border terminals leading to the Gaza Strip.

Israel alleged that Palestinian fighters fired four shells into the Western Negev, on Thursday morning, and that more than 60 homemade shells were fired from Gaza since Wednesday.

It is worth mentioning that Israeli Prime Minister, Benjamin Netanyahu, threatened what he described as a “fierce response to the shells fired from Gaza into adjacent Israeli areas”, Israeli sources said.

On Tuesday, an Israeli missile killed three fighters of the al-Quds Brigades, the armed wing of the Islamic Jihad, east of Rafah.

Also on Monday, Israeli forces, stationed at the Allenby Border Terminal with Jordan, shot and killed a Palestinian judge who works in Jordan.

The slain Palestinian, who also hold a Jordanian citizenship, has been identified as Raed Ala’ Ed-Deen Z’eitar, age 38, from the northern West Bank city of Nablus.