Abbas: ‘We have not Received any Request to Extend Negotiations’ 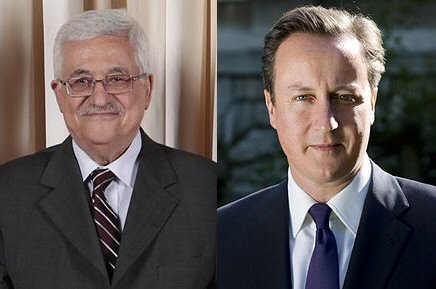 Abbas made these comments as part of a press conferences held jointly with British Prime Minister, David Cameron, at the Presidential Palace in Bethlehem, where they discussed mutual relations and cooperation and the latest developments and obstacles to peace process.

Regarding the extension of negotiations to reach a framework for a peace deal, Abbas said: ‘We have agreed to negotiate for nine months in hope that we bring about a tangible achievement within this period. However, we have not discussed the issue of extending negotiations.’

Abbas added: ‘It was the US who proposed the framework deal. We stated that we won’t judge this deal before examining it. We want this deal to be in line with relevant UN resolutions.’

Regarding the recent escalation in the Gaza Strip, Abbas stated: ‘The Israeli occupation forces have cold-bloodedly murdered six Palestinians in the West Bank and Gaza Strip. We have not heard any condemnation or apology from the Israeli government about this. On Wednesday, Israel responded to rockets launched on it from Gaza…We condemn this military escalation in all its forms.’

Regarding Palestinian statehood, Abbas said that ‘We reiterated [to Cameron] that we will proceed with our efforts to reach a peaceful and political solution that brings about peace and stability in this region and put an end to the [Israeli] occupation that started back in 1967, to achieve the establishment of the independent Palestinian state with East Jerusalem as its capital.’

Cameron said: ‘I believe that you are a peace partner and that making peace requires taking tough decisions. Britain will spare no effort in order to ensure the success of Palestinian Israeli negotiations. We would like to see a two-state solution, whereby a viable Palestinian state to be established on 1967 borders live side by side Israel with land swaps.’

Cameron added: ‘I know that you [Abbas] understand that the Palestinian state could not be established through violence but through negotiations,’ calling upon the two sides to grasp the current opportunity to make peace.

Cameron touched upon the assistance offered by Britain to institution building and robust economy, and said that his country would offer support for 100 Palestinian enterprises to invest in Area C, which would boost Palestinian economy, he said.