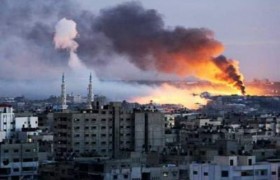 Sheikh Khaled al-Batsh, a senior political leader of the Islamic Jihad in the Gaza Strip, has reported that Egyptian mediation efforts have managed to achieve a truce between the resistance in Gaza and Israel, based on the understandings reached following Israel’s war on Gaza in 2012. Al-Batsh said that Palestinian armed resistance groups in Gaza will be committed to the truce as long as Israel respects it.

On his Facebook page, al-Batsh stated that his movement thanks Egypt for its efforts, and saluted all resistance groups, mainly the al-Quds Brigades, the armed wing of the Islamic Jihad.

Israel’s online daily, Yedioth Ahronoth, quoted another military official saying “the Egyptians started mediation talks since the escalation started on Wednesday, in an attempt to reach an undeclared truce, but no official truce agreement was reached”.

He added that, despite declaring Hamas a terrorist group, Egyptian officials are still trying to prevent further escalation, and are holding direct talks with representatives of the Islamic Jihad.

Moshir al-Masry, a political leader of the Hamas movement, said that Egypt never contacted the movement regarding a truce understanding, and that his movement is interested in a ceasefire agreement, but added that “should Israel violate it, the resistance will strike back.”

“We do not want to drag our Palestinian people into any war; armed groups are only retaliating to Israeli shells; so far, Israel is not committed to any truce,” he said. “Israeli leaders are threatening Gaza, our relation with Egypt is fragile, and Egypt needs to reevaluate its stances.”

Mahmoud Zaher, a senior Egyptian military and strategic affairs expert, said that Egypt is willing to improve relations with Hamas, and welcome it, but that Hamas needs to act seriously towards improving these relations.

“Hamas needs to understand that our priority is Palestine and stopping Israel’s aggression,” he said, “Hamas needs to realize that Egypt was the first country that supported the Palestinian resistance.”

Ehab al-Ghaseen, spokesperson of the Hamas-run government in Gaza, stated Thursday that Palestinian armed resistance groups have the right to defend their people, and clearly understand that truce is a national interest.

Al-Ghaseen added that Israel is violating this fragile truce, and is responsible for any further escalation.

On Friday, at dawn, the Israeli Air Force bombarded several locations in the Gaza Strip, causing property damage, but no injuries.

On Thursday afternoon, at least three Palestinians were injured when the army bombarded a border tunnel in Rafah, in the southern part of the Gaza Strip. One woman in a nearby home was seriously wounded.