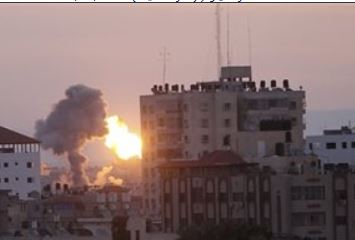 The army also bombarded a land located close to the Safina resistance camp, near Gaza City.

A fourth strike, carried out by the army, targeted an open land in Khan Younis, in the southern part of the Gaza Strip.

Medical sources reported no casualties, while excessive damages have been reported.

An Israeli military spokesperson said the army targeted sites in southern and northern Gaza, and alleged that the escalation comes in retaliation to homemade shells fired by resistance groups, in Gaza, targeting adjacent Israeli areas.

In related news, medical sources in Gaza have reported that five Palestinians were wounded in an explosion, in Beit Hanoun, in the northern part of the Gaza Strip.

One of the wounded is a 55-year-old woman who suffered a serious injury; all wounded Palestinians were moved to a local hospital.

Although an agreement was reached to declare a truce, the army continued its strikes against Gaza, while armed groups in Gaza fired homemade shells.

Israeli sources quoted a state security official claiming that Hamas and the Islamic Jihad have “raised the White flag, and asked for a truce through media outlets”, according to the sources.

The statements came shortly before Palestinian fighters fired at least eleven shells in retaliation to the Israeli bombardment.

Israeli military officials threatened that “should Palestinian armed groups continue to attack Israel, Tel Aviv will prove it has various means to counter such attacks…”

Commenting on shells fired by fighters of the Islamic Jihad in Gaza, a security official claimed Hamas “knew beforehand shells will be fired into Israel”, and added that Hamas “was surprised by the number of shells, and acted fast to restore calm.”