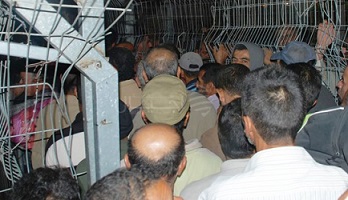 [Monday, March 17, 2014] Israeli soldiers, stationed at the Taybeh roadblock, south of the northern West Bank city of Tulkarem, violently attacked a Palestinian woman, and tried to force her to be strip-searched.The woman was heading to an Israeli detention facility to visit her detained son, Ahmad Abdul-Fattah Awwad, sentenced by Israel to 40 years imprisonment and held at the Gilboa’ Israeli prison.

The Palestinian Ministry of Detainees has reported that the incident took place on March 11, 2014; Israeli soldiers detained the mother in a small room, and ordered her to remove her clothes to be searched.

When the woman refused, a female soldier struck her in the head and various body parts using a body scanner she carried.

The soldier was shouting and cursing at the Palestinian woman, and was stepping on some of her clothing items.

After filing a complaint, the Red Cross contacted the soldiers and informed the officer in charge of the roadblock of what happened; the officer said he managed to identify the soldier.

The military informed the woman that she would be denied the right to visit with her detained son unless she dropped the complaint.

A Red Cross representative said the bruises the woman suffered had been documented. The woman said this attack was not the first of its kind.

There have been numerous similar incidents, at roadblocks and in Israeli prisons, were families have been attacked and humiliated by soldiers, for refusing to be strip-searched, while many families have also been denied the right to visit with their detained loved ones.