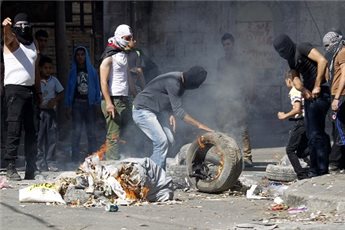 [Monday Evening, March 17, 2014] Palestinian medical sources have reported that four Palestinians were wounded, with several others suffering the effects of teargas inhalation, during clashes with Israeli soldiers invading Hebron city, in the southern part of the occupied West Bank.The clashes took place after dozens of soldiers invaded the Bab az-Zaweya area, in the center of Hebron city, the Ma’an News Agency has reported.

Medical sources said that four Palestinians were shot by rubber-coated metal bullets fired by the army, while several Palestinians received treatment for the effects of teargas inhalation.

Later on, several Palestinians hurled stones at a roadblock installed at the entrance of Shuhada Street, in the city.

Eyewitnesses said that one Israeli soldier was mildly injured, after he was struck in the face by a stone thrown by one of the protesters.

In related news, soldiers invaded Jenin city, in the northern part of the West Bank, firing rounds of live ammunition, gas bombs and rubber-coated metal bullets at local youth who hurled stones at them.

Local sources said the soldiers invaded Jenin city center, firing at random during the invasion. No injuries were reported.