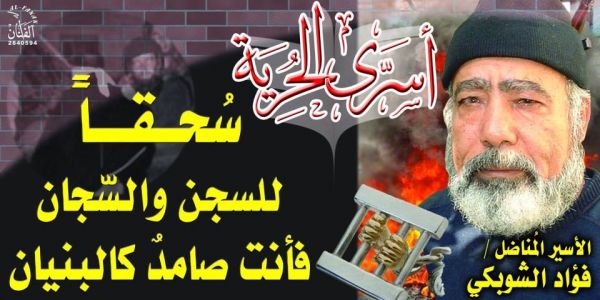 Fadi Obeidat, a lawyer of the Palestinian Ministry of Detainees, has reported that two detainees, including a 70-year old, are facing serious health deterioration while Israel is denying them the right to proper and specialized medical treatment.Obeidat said detainee Fuad Shobaky, 76, suffers from various health conditions, and requires urgent medical attention. Shobaky is serving a 20-year term.

Shobaky also faces complications in his eyes, and was supposed to undergo surgery three months ago, but Israel keeps delaying the medical procedure.

He has also had a hemorrhoidectomy, but has not fully healed, suffering high blood pressure, a prostate disease, and other health issues.

A urologist at the Ramla Hospital also examined him for some infections, but Shobaky was never informed of the results of his visit, and was not given any medications.
Shobaky also has a swelling in his back, and had it x-rayed, but also never got the result.

Obeyyat, 21 and sentenced to 26 months imprisonment, is currently held at the Ofer Israeli prison.

He was attacked by the arresting soldiers and suffered a fracture in his forehead, and bled from his nose, mouth and ears before he lost consciousness.

He was then moved to the Hadassah Israeli Hospital in Jerusalem.

The detainee stated he suffers from extreme pain in the head, resulting from various fluid-filled leptomeningeal cysts in the skull.

A doctor told him he needs to have the cysts removed as they could be life threatening, but he is still waiting for the surgery to be scheduled.

There are more than 205 Palestinian detainees who have died in Israeli prisons since 1967, including 74 who were deliberately killed, seven of whom were shot and killed in prison, 71 who died due to extreme torture, and 53 who died due to the lack or absence of medical attention.