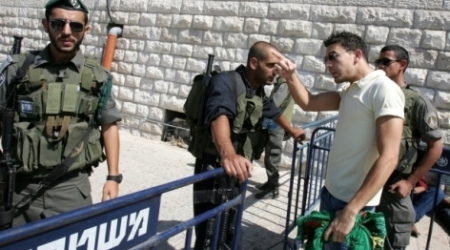 A Jerusalemite initiative, under the name ‘Worship is my right’, started on Wednesday, aiming to expose Israel’s policies and violent practices against Palestinians, Muslims and Christians in Jerusalem, with the hope of securing thousands of signatures — enough to sue Israel in the international courts.Israeli forces impose severe restrictions on the entry of people of Jerusalem and pre-1948 Palestine to al-Aqsa mosque, and also prevent the people of the Gaza Strip and West Bank from reaching it, Al Ray reports.

They have erected a number of checkpoints at the entrances of the holy city, hindering the movement of West Bank citizens.

The Israeli occupation has also deprived Christians from reaching the Church of the Holy Sepulchre, by not giving them permits, especially during holidays.

The owner of the initiative, Amid Barahma, said that it does not belong to any party but targets all the people of Palestine in Jerusalem, Gaza and the West Bank, to highlight the unfair and repressive Israeli measures against Muslims and Christians, and the restriction on the freedom of movement through Israeli checkpoints.

He indicated that several young volunteers are participating in the initiative and will exert their efforts to accomplish success.