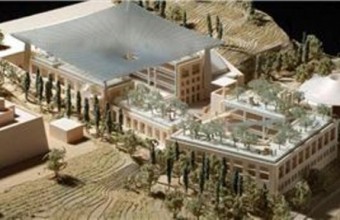 Israeli occupation authorities started to build a huge Jewish archeological center over 35 dunums of Palestinian lands in occupied Jerusalem, on Wednesday, according to Maariv newspaper.The newspaper stated that this center would include a library and a museum to display alleged ancient artifacts and scrolls.

The new archaeological center is being built next to the Israel museum and will eventually serve as the Israeli antiquity authority’s headquarters, the PNN reports.

Some 80 million dollars, mostly private funds, have been earmarked for the project, provided by some 30 donors from the US, Europe and Israel.

In a related context, Al-Aqsa Foundation for Endowment and Heritage said that Israeli occupation authorities had started implementing the final phase of excavations at the entrance to neighborhood of Wadi Hilweh, in Silwan, only 100 meters south of al Aqsa Mosque.

The Foundation reported, on Tuesday, that the total area of the mentioned excavation is up to about six acres, drilled to depths of 20 meters.

The foundation’s report stated that the occupation destroyed dozens of Arab and Islamic monuments from the Umayyad period, reaching to the tunnels under al-Aqsa Mosque.

Dozens of Israeli settlers and foreigners have recently started digging at the entrance to Wadi Hilweh, the foundation’s field report added. Al-Aqsa foundation stated that the Judaization scheme is funded by Elad association as a prelude to establish a huge building consisting of seven floors called the ‘biblical structure’, which is also supported by the Israeli government and the occupied Jerusalem municipality.

Many Islamic relics dating back to the Umayyad and Abbasid periods are found in this area, the foundation said, warning that the Israeli occupation will destroy whatever Islamic relics it finds during the excavations.

Al-Aqsa foundation pointed out that the Israeli occupation started its excavations under al-Aqsa Mosque and other areas in occupied Jerusalem at different stages starting from 2002, adding that the process accelerated starting from 2007.