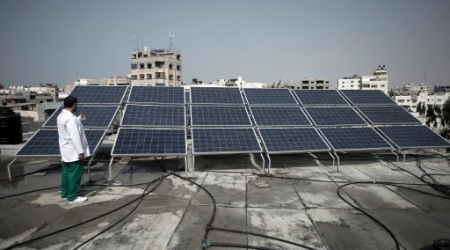 On the roof of Gaza City’s children’s hospital, a pristine row of solar panels gleams in the sunlight, an out-of-place symbol of modern, clean energy in the impoverished Strip.Juan Cole via Al Ray

As the coastal Palestinian territory lives through the worst fuel shortage in its history, many of Gaza’s 1.6 million inhabitants are beginning to see solar power not just as a viable alternative, but perhaps as the only solution to the energy crisis.

‘We were forced to consider relying on solar power alone after the energy crisis that events in Egypt brought about,’ said hospital director Nabil al-Burqani, referring to the closure of cross-border tunnels which halted the fuel supply into Gaza.

‘We need solar energy in order to keep up care for babies in the maternity ward,’ he told AFP. ‘If there’s just a minute-long cut to the electricity that runs the baby incubators, a child could die.’

Gazans have learned to live with daily power outages of up to 12 hours that have affected private homes, schools, hospitals, businesses and water and sanitation plants.

The ruling Hamas movement has blamed the crisis on Egypt’s destruction of cross-border tunnels which had been used for importing fuel, a decision implemented after the military overthrew Islamist president Mohamed Morsi in July 2013.

The tunnels had played a key role in Gaza’s economy since 2006, when Israel imposed a blockade after the capture of an Israeli soldier by Palestinian militants in a cross-border raid. The restrictions were tightened the following year when Hamas seized power.
Although the Israeli restrictions have since been eased, the tunnels continued to be the main conduit for fuel.

Continue reading at Al Ray, via link below.