4 Days of Clashes in Aida Camp, After Activists Break through Wall 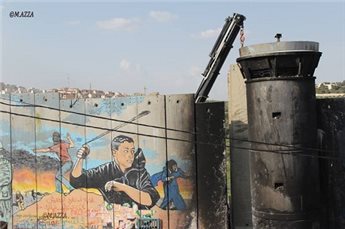 A number of Israeli soldiers gathered in the area of Aida’s Key of Return, Amira said. Troops were also stationed on residents’ rooftops, using them as military posts during clashes with Palestinians in the area.

The raid came on the same day which Israeli forces reinstalled a section of the separation wall that had been destroyed by Palestinians in the camp, on Thursday.

There are 19 refugee camps in the occupied West Bank, within which live about a quarter of the 771,000 registered refugees in the territory.

Aida camp is a frequent site of clashes because it is located beside Rachel’s Tomb, which is surrounded on three sides by the Israeli annexation wall, despite being in the middle of the Palestinian city of Bethlehem.

More than 760,000 Palestinians — estimated today to number 4.8 million with their descendants — were pushed into exile or driven out of their homes in the conflict surrounding Israel’s creation in 1948.

For details and photos, continue reading at Ma’an, via link below.