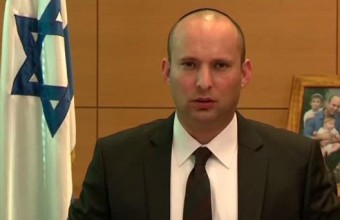 Israel’s Economy Minister, Naftali Bennett, said that Israel will reconsider the fourth and final release of Palestinian prisoners.Bennett said, on Tuesday, that the release of the 104 prisoners detained before the signing of the Oslo Accords in 1993, on four stages, was a gesture for resuming peace talks, which have become uncertain to take place at the end of March, because negotiations are now at a standstill.

Bennett added that the Palestinians’ demand to release the prisoners without recognizing Israel as a Jewish state will not lead to a peace agreement, according to a PNN report.

He said, in an interview with Israel Radio, that the majority of the Israeli government officials have suggested scrapping the release of Palestinian prisoners.

Zahava Gal-On, leader of the left-wing Meretz party, said that Israel cannot violate its commitment to release the Palestinian prisoners.

She added that if the US is willing to save the Israeli-Palestinian negotiations, it must release Jonathan Pollard, who is convicted by the US of spying for Israel.

According to report by the Ma’an News Agency, A senior Palestinian official told AFP, on the condition of anonymity, that in recent talks with US special envoy Martin Indyk, Abbas warned if the April 29 talks deadline was not met ‘Israel would be in violation of agreements and (the Palestinians) would have the right to turn to the UN and to take any measures it deems necessary.’