Gunmen Open Fire at Car of Fateh Official in Jenin 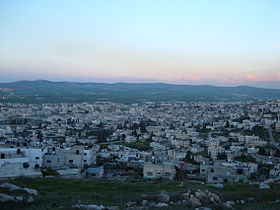 [Friday, March 28, 2014] Unknown gunmen opened fire on the car of an official of President Mahmoud Abbas’ Fateh movement, as it was parked in front of his home in Jenin city, in the northern part of the occupied West Bank.Local sources said that Ata Abu Ermeila, secretary of Fateh movement in Jenin, parked his car in front of his home, and that the shots were fired at it after he went inside his home, the Radio Bethlehem 2000 has reported.

The sources said the attack might have been “a message” to the official, and that it is likely the shooters did not intend to physically harm him.

The shooters drove away directly after the shooting; the Palestinian Security Forces in Jenin did not comment on the incident.

Abu Ermeila is originally from the Jenin refugee camp, but lives in Jenin city.