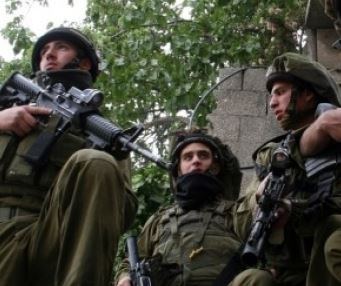 Israeli soldiers invaded on Saturday [March 28, 2014] several neighborhoods in the southern West Bank city of Hebron, as well as the nearby towns of Bani Neim and ath-Thaheriyya, handing out interrogation orders to a number of citizens.Local sources in Hebron city said that dozens of soldiers invaded several neighborhoods, and installed roadblocks in the city, especially at the northern entrance, in the Jouret Bahlass area.

The soldiers stopped and searched dozens of cars and inspected the ID cards of the passengers.

The army also invaded Bani Neim and ath-Thaheriyya, violently breaking into and searching dozens of homes, ransacking their property, and serving several residents with warrants ordering them to head to the Etzion military and security base for interrogation.

On Friday evening, soldiers kidnapped four Palestinians after they allegedly infiltrated an Israeli settlement in the central West Bank.

According to the Israeli Walla News Agency, the army kidnapped four unarmed Palestinians after infiltrating the Neveh Telmon illegal settlement, in the “Benjamin area” of the occupied West Bank.

The army said that the four were moved to an interrogation facility.