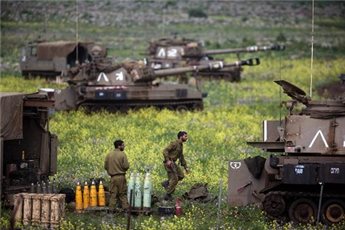 Israeli troops, late Friday, reportedly shot and killed what the military said were ‘infiltrators’ trying to breach a separation barrier from the Syrian-controlled side of the Israeli-occupied Golan Heights, according to military and media sources.
Photo: Israeli Army Artillery battery unit is deployed on alert in the Israeli-annexed Golan Heights near the border with Syria on March 19, 2014

(AFP/Ma’an) Israeli troops did not carry out arrest procedure before opening fire, a Ynet report said.

Israel, which is technically at war with Syria, seized 1,200 square kilometers (460 square miles) of the Golan Heights plateau during the 1967 Six-Day War, and later annexed it in a move never recognized by the international community.

Last Wednesday, Israeli aircraft struck Syria in the wake of a bomb attack on the heights which wounded four Israeli soldiers.

Since the Syrian civil conflict erupted in 2011, the plateau has been tense, with a growing number of stray projectiles hitting the Israeli side, prompting an occasional armed response.