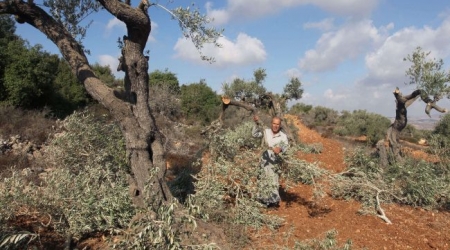 [Saturday Evening, March 29, 2014] A number of Israeli settlers invaded a Palestinian olive orchard in Husan town, west of Bethlehem, and uprooted dozens of saplings. Resident Mohammad Sabateen told the WAFA News Agency that, as he went to his orchard in Wadi Abu al-Hasan area, east of Husan, he found out that the settlers uprooted at least fifty olive saplings.

The orchard is located near the illegitimate Boaz settlement outpost, installed on private Palestinian property.

Sabateen added that, in February of this year, fanatic settlers invaded his orchard, and uprooted more than 60 olive saplings.

Israeli settlers are responsible for hundreds of attacks against Palestinian orchards and farmlands, in addition to flooding Palestinian farmlands with sewage.

Other attacks include defacing and burning several mosques and churches, attacking and defacing graves in Islamic and Christian graveyards, burning Palestinian-owned cars, slashing tires and writing racist graffiti, including anti-Islamic and anti-Christian graffiti.

The attacks took place in different parts of occupied Palestine, including occupied Jerusalem.