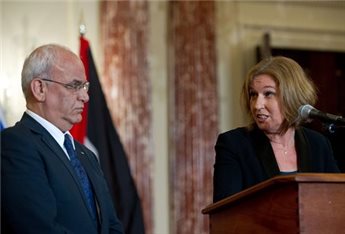 President Mahmoud Abbas has been exerting all efforts to negotiate the release of the fourth group of Palestinian veteran prisoners, a PLO official said Sunday.Chief PLO negotiator Saeb Erekat said in a statement that Israel ‘must release the fourth batch’ of prisoners, held in Israeli jails since before the 1993 Oslo Accords, Ma’an reports.

The deal at the beginning of the negotiations was for Israel to release 104 veteran prisoners in exchange for the PLO’s pledge not to attempt a statehood bid at the UN or other international bodies, Erekat reiterated. He said the PLO was involved in ‘sensitive talks’ with the US and the Israel, but that he could not reveal details to the media.

Israel was scheduled to release the final group of prisoners on Saturday, but did not. So far, 78 of a total of 104 veteran Palestinian prisoners have been freed in three separate tranches.

Separately, on Saturday, the London-based Arabic-language newspaper al-Hayat quoted western diplomats as saying that US Secretary of State John Kerry was trying to overcome the impasse over the recognition of Israel as a ‘Jewish state.’

According to the report, Kerry suggested changing the language to ‘the homeland of the Jewish people.’ In exchange, the Palestinians would have to agree to establish a capital in only a part of East Jerusalem, not all of it. The report said the PLO had rejected the proposal.

The PLO recognized Israel’s right to exist in 1988, but says that recognizing Israel as a ‘Jewish state’ could jeopardize the right of return for Palestinian refugees and limit the rights of Palestinians living in Israel.

Israel’s government has announced the construction of thousands of settler housing units and its army has killed 60 Palestinians in the West Bank and Gaza since the negotiations were relaunched, in July.

According to WAFA, the League of Arab States has demanded the release of all Palestinian prisoners of Women and children, particularly the agreed upon final batch of prisoners held by Israel since before the 1993 Oslo agreements.

In a statement marking the 38th anniversary of Earth Day, the league affirmed its support of the Palestinian people who seek to establish their independent state of Palestine within the 1967 borders and with east Jerusalem as its capital.

It called to lift the siege that has been imposed on the Gaza Strip by Israel for more than half a decade in total violation of the international law. It also called upon the international community to uphold its responsibilities and exert pressure on Israel to stop its settlement policy.

The league stressed its total rejection to Israel’s plans to judize Jerusalem and the ongoing systematic attacks on holy sites in an attempt to change facts on ground and change the Palestinian-Arab identity.

It further stressed that Israel must comply with United Nations’ resolutions and the international legitimacy.

Army Shoots One Palestinian In Salfit, Seven In Tubas