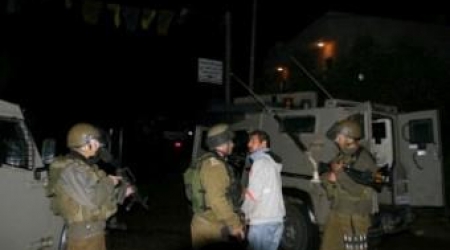 The sources further stated that Israeli soldiers confiscated the vehicle of one Abu Maria, after abducting him.

In a related context, one Jerusalemite citizen was injured and three others kidnapped during Israeli raids in Issawiya town, northeast of Jerusalem. Eyewitnesses reported that Israeli forces raided the town, breaking into citizens’ houses and wreaking havoc on them, upon which clashes broke out between a number of youth and soldiers.

The young men who were kidnapped are idientified as Wahib Ubeid, Muhammad Ubeid, and Mufeed Ubeid, while Ahmed Ubeid was shot with a rubber-coated steel bullet in his foot.

Furthermore, Ma’an News Agency reports that Israeli forces detained several Palestinians in overnight arrest raids across the West Bank, according to locals and a military spokesman.

Locals told Ma’an that Israeli troops stormed a village in the Jenin district in the northern West Bank and detained three Palestinian men, one of whom is an officer in the Palestinian Authority security forces.

A military spokesman said the army detained six Palestinians overnight — two in Jabaa, one in al-Fureidis, one in Bethlehem, one in Hebron, and one in Tawas near Hebron.