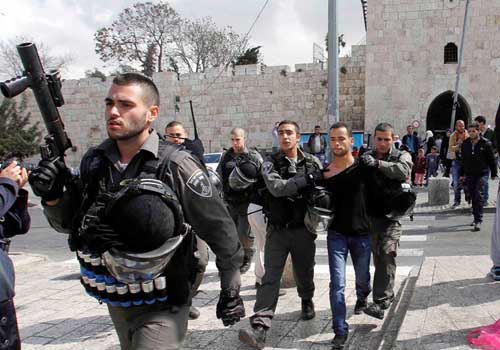 It said that at least one Palestinian was kidnapped in occupied Jerusalem, and several others were wounded, including a woman who suffered burns in her face, after the soldiers assaulted the protesters in Bab al-‘Amoud area, in the center of occupied Jerusalem.

The army also kidnapped another Palestinian in the Sultan Suleiman Street, in occupied Jerusalem, and injured a woman after attacking her and spraying her face with chemically modified pepper spray.

Abeer Zayyad of the Jerusalem First Campaign said the protesters were holding rallies to express their determination and steadfastness in their own land, and to protest the ongoing Israeli occupation and crimes against the Palestinian people.

She added that the army first kidnapped Khaled Husseini, coordinator of the campaign, on Sunday morning. Then, hundreds of soldiers and police officers were deployed in Bab al-‘Amoud, where they assaulted the nonviolent protesters.

In addition, the Follow-up Committee in al-Isawiyya town, of occupied Jerusalem, said that the soldiers shot and wounded one young man, and kidnapped three others, during dawn clashes which took place on Sunday, after dozens of soldiers invaded the area.

Coordinator of the Popular Committee against the Wall and Settlements in nearby Beit Ummar town, Mohammad Awad, said the army fired rubber-coated metal bullets, gas bombs and concussion grenades at the nonviolent protesters as they marched towards the Jerusalem-Hebron Road near the town.

Awad added that the soldiers also sprayed the protesters with sewage water in an attempt to force them to disperse.

The protesters marched carrying Palestinian flags and posters demanding the Israeli High Court to void its illegitimate decision which granted the settlers ownership over the Palestinian home, WAFA said.

Member of the Hebron Defense Committee, Mohammad al-Jabreeny, said the Palestinians chose to mark Land Day by protesting near the rugby home to affirm their rejection of the decision of the Israeli court, and to affirm that the property is located within the occupied State of Palestine, a state recognized by the United Nations, therefore, the Israeli occupation has no legitimacy.

Member of the Union of Palestinian Women Committees, Sara Mteir, said Palestinians will continue their resistance, and will remain steadfast until the liberation of their land despite the destruction of homes and property carried out by the occupation forces.

The National Committee against the Wall and Settlements in the al-Tiwani area, south of Hebron, in cooperation with student groups at the al-Quds Open University, planted trees in Palestinian lands which Israel intends to illegally confiscate so that it can expand the Ma’on illegal settlement, built on Palestinian lands.

In Tulkarem, in the northern part of the occupied West
Bank, several Palestinians were injured, mainly due to effects of tear gas inhalation, after Israeli soldiers attacked their nonviolent Land Day protest, west of the city.

The protest started in front of the Polytechnic College and, as the protesters headed towards the Israeli roadblock in the area, soldiers fired several gas bombs at them, leading to clashes with local youth.

The residents also planted olive saplings in lands belonging to the college, near the Annexation Wall in the area.

Kamil said that land is the core of the struggle, the symbol of life to the Palestinian people who lost thousands of residents to Israeli violence, while hundreds of thousands have been injured and imprisoned.

The army broke into and searched dozens of homes and interrogated several Palestinians in their own homes, and on roadblocks spread across the occupied West Bank.

On Saturday, several fanatic Israeli settlers attacked Palestinian homes near the Rajaby house, hurling stones at them and at several Palestinian cars.

Palestinians started marking land day back on March 30, 1976, when Israel illegally annexed thousands of dunams of Palestinian lands and private property, and considered those lands as part of the state.

The Palestinians marched to protest the decision and, back then, the army shot and killed six Palestinians, and injured dozens of others.