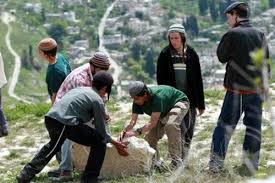 [Monday Morning, March 31, 2014] Palestinian medical sources said that a young Palestinian man was shot and injured by an Israeli settler, south of Nablus, in the northern part of the occupied West Bank. A young man was also injured after being attacked by settlers in occupied Jerusalem.The sources stated that Nidal Yousef Shihada, 25, from Orif town, southwest of Nablus, was shot by a live round in his leg, and was moved to a local hospital.

The incident took place at the Jeet Junction; the wounded young man was moved to the Rafidia Hospital, in Nablus.

On Sunday night, resident Ghaleb Edrees, 24, was injured after being violently attacked by a group of settlers in the al-Qarmy neighborhood, in the Old City of occupied Jerusalem.

Eyewitnesses said that the settlers sprayed Edrees’s face with pepper spray, and assaulted him.

He was moved to the Shaare Zedek Medical Center in Jerusalem suffering moderate injuries, especially in the face, chest and legs.

Resident Jawad Edrees said the attack took place after a group of settlers invaded the neighborhood and attacked Edrees and his friend.