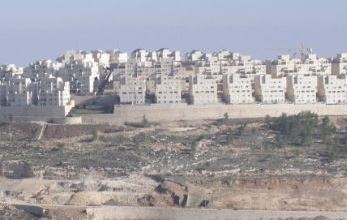 [Monday, March 31, 2014] The Israeli government decided to illegally confiscate nearly 300 dunams of Palestinian lands south of the northern West Bank city of Nablus, in order to build a new settlement.Ghassan Daghlas, in charge of the Israeli Settlements File at the Palestinian Authority, in the northern part of the West Bank, said that the army decided to confiscate some 300 dunams belonging to villagers of Jaloud village.

Daghlas added that the army decided to confiscate Basins 12 and 13, in the Rasem Weis al-Khafafeesh area which belongs to Jaloud villagers, the WAFA News Agency has reported.

He said that the illegal Israeli plan aims at building an educational facility, a graveyard and a farm.

In related news, a number of Israeli settlers burnt, on Monday, ten olive trees in Qaryout village, south of Nablus.

Israel’s settlements in occupied Palestine are illegitimate under International Law and the Fourth Geneva Convention, to which Israel is a signatory.

They are largely built on privately owned Palestinian lands and orchards illegally annexed by Israel.

Israel’s settlement construction and expansion activities are amongst the main issues obstructing direct peace talks and hindering the chances of achieving a final status peace agreement.