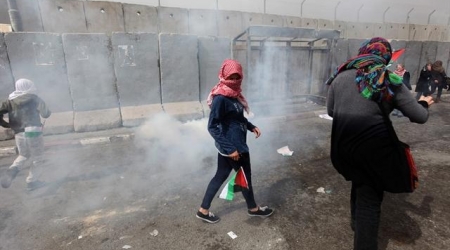 Clashes erupted Sunday between a number of Palestinian youth and Israeli occupation forces at an Israeli military checkpoint, west of the West Bank city of Tulkarem.Local sources said that a student rally started from Palestinian Technical University-Kadoorie on Sunday, marking Land Day. The rally headed to an Israeli military checkpoint, west of Tulkarem, erected on the Palestinian village of Kadoorie, in order to plant trees near the apartheid separation wall, Al Ray Palestinian Media Agency has reported.

Israeli forces fired tear gas and sound grenades, resulting in a number of suffocation cases among the youth.

The occupation forces carry out night storms every day in Tulkarem and its surroundings. However, this time, the forces stormed the city by surprise at dawn, on Sunday.