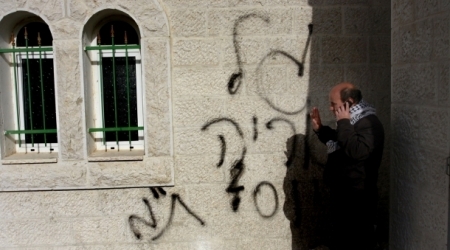 Jewish Israeli vandals, on Wednesday, slashed the tires of eight cars belonging to Palestinians in Nazareth City and occupied the historical city of Acre, where they painted religious symbols on buildings, there.According to local media, settlers punctured the tire of a car owned by a Palestinian contractor from ‘The Industrial Zone’ of Nazareth, before painting the Star of David on it.

Nazareth is classified as of the Israeli-controlled Area C territories, which are about 61 percent of the occupied West Bank, according to Al Ray.

A recent World Bank report states that Israeli control of this largest area of the West Bank deprives the Palestinian economy of an estimated $3.4 billion a year.

The Industrial Zone has seen more than 5 settler attacks this month. Seven other cars, in different neighborhoods, were also violated in Acre city.